The fundamentals of 4...20 mA current loops

4…20 mA current is commonly used to connect process signals to a controller in industrial applications. Sometimes, an analog voltage signal or digital communications is used, but there are many advantages to using a current loop to send process values to the controller.

In this article, we will take a closer look at the principles behind the industry standard 4…20 mA current loops.

Why use current instead of voltage?

To understand this, we first need a fundamental understanding of current, voltage, and resistance:

Ohm's Law defines how current, voltage and resistance relate to each other in a circuit:

To illustrate Ohm's Law, we will have a look at a typical AA battery:

The charge at the left terminal, (Point A) is negative compared to the charge at right terminal, (point B). In this battery, the difference in charge, (the voltage), is 1.5 V.

When a circuit is connected to the battery, it creates a path for current to flow from the positive terminal to the negative terminal. The lamp in the following circuit has a resistance of 5 Ω. This resistance regulates the amount of current flowing through the circuit. 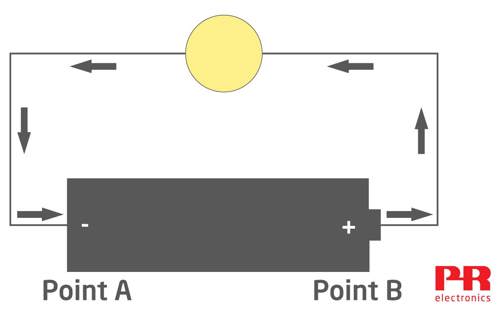 The amount of current flow can be changed by altering the loop resistance or the loop voltage. Most current loops found in industrial applications are powered by a fixed 24 V source, so the loop current is changed by varying the opposition to current flow on the loop.

What is a loop transmitter?

In the example below a loop transmitter measures a temperature sensor. The transmitter is programmed to regulate loop current flow between 4…20 mA as temperature changes from 0…100°C. 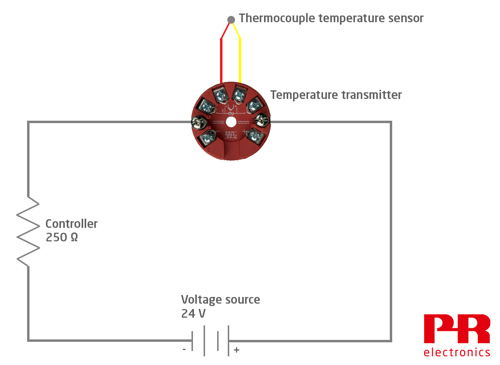 A process controller is also wired into the loop in order to measure loop current. The resistance symbol in this drawing symbolizes the controller; most have a fixed resistance of 250 Ω. The loop wire itself has some resistance as well, which should be considered when calculating a loop budget (more on that further down).

Current is common in a series circuit, so the loop current regulated by the transmitter and the current that is measured by the controller are identical.

To ensure accurate process measurements, it is important to minimize error due to electromagnetic interference (EMI).

What is Electromagnetic interference?

Electromagnetic interference (EMI) is interference caused by the electromagnetic fields generated by electrical or electronic devices during their operation. EMI is commonly found in industrial environments, and some sources are: Variable frequency drives, soft starters, across the line contactors, mobile radios, 50/60 Hz noise from power mains, generator slip rings, DC motor commutators, and electrostatic discharge created within the process or by lightning (we have collected more information on the subject here).

Current signals are inherently more immune to EMI than voltage signals, especially over longer distances. This is one of the big advantages of using current instead of voltage to get process measurements to a control system. Other reasons for why 4…20 mA is a widely established standard for use in process control are:

In the previous example, the transmitter regulates current flow on a loop that is powered by 24 V, and has one other device, the controller, wired into the loop.

Now, if we add a chart recorder to the loop, we have to find out if the loop will still work correctly with the additional 350 Ω resistance. To do this out, we calculate a loop budget. 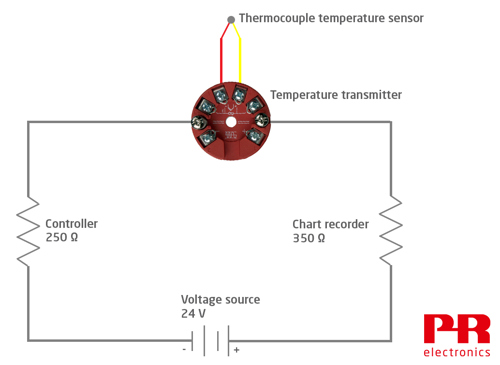 How to calculate a loop budget:

The transmitter data sheet shows it requires at least 8 V to energize.

Finally, the lenght of the wire has to be considered. In this example, the distance between transmitter and controller/chart recorder is 40 meters. Thus, the total loop wire length is 80 meters. Assuming wires with a cross sectional area of 0.445 mm² are used, the total loop wire resistance is 10.7 Ω. Using Ohm’s Law: 0.023 A x 10.7 Ω = 0.25 V.

Now, subtract all the voltage drops from the loop voltage source:

After calculating our budget, we now know that this loop has more than enough voltage to drive 23 mA through all loop loads in case of a sensor error occur.

The loop should always be protected from short circuit current by adding a fuse to the loop. This fuse protects the loop from excessive current, if a short circuit occurs that bypasses the 4…20 mA current regulation provided by the transmitter. Loop current will drop to 0 mA if the fuse blows, as a result the controller and chart recorder will detect this unusually low current value as error. 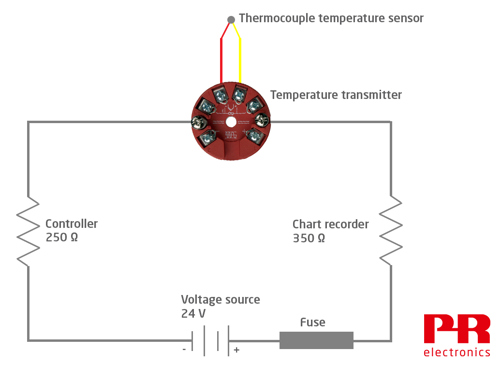 Some advantages of 2-wire transmitters:

However, depending on your needs, 4-wire transmitters can be the better choice. 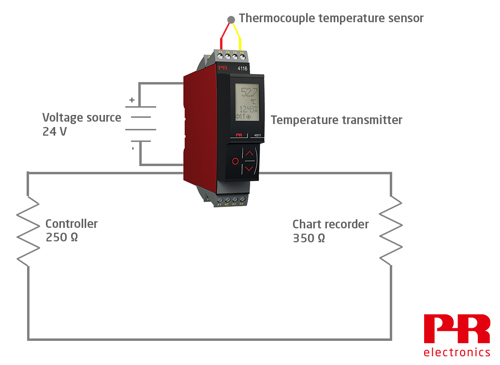 Some advantages of 4-wire transmitters:

Devices on a current loop are either active or passive. “Active” in this context means that a device has a voltage source that powers the loop. There can only be one active device on a current loop. “Passive” devices are the exact opposite – they do not have their own voltage source and therefore are dependent on an external source. You can find more information about active/passive signals here.

Back to PR Knowledge Library