The fundamentals of RTD temperature sensors

An RTD temperature sensor is a common device for temperature measurements in a wide range of industrial applications. In this article, we take a look at how they work, the most common types, and their advantages and disadvantages.

The acronym “RTD” stands for “Resistance Temperature Detector”. Typically, RTDs contain either platinum, nickel, or copper wires, as these materials have a positive temperature coefficient. This means that a rise in temperature results in an increased resistance – this change of resistance is then used to detect and measure temperature changes.

Platinum RTDs are the most common type of RTD used in industrial applications. This is because platinum has excellent corrosion resistance, excellent long-term stability, and measures a wide range of temperature, (-200…+850°C).

Nickel RTDs are less expensive than platinum and have good corrosion resistance. However, nickel ages more rapidly over time and loses accuracy at higher temperatures. Nickel is limited to a measurement range of -80…+260°C.

Copper RTDs have the best resistance to temperature linearity of the three RTD types, and copper is a low cost material. However, copper oxidizes at higher temperatures. Copper is limited to a measurement range of -200…+260°C.

How RTDs are constructed 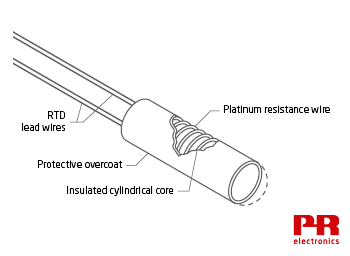 In a wire wound RTD, a resistance wire is wound around a non-conducting core, which is usually made of ceramic. The sensor maker carefully trims the length of resistance wire to achieve the specified resistance at 0°C. This is called the “R0” resistance. E.g. the R0 resistance of a Pt100 = 100 Ω.

Laboratory-grade RTDs used by calibration and standards laboratories eliminate this source of error by loosely winding resistance wire around a non-conducting support structure. This type of RTD can be extremely accurate, but is fragile and not suited for most industrial applications. 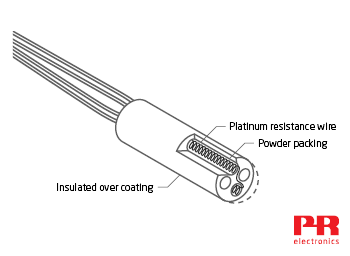 In a coiled element RTD, the resistance wire is rolled into small coils, which loosely fit into a ceramic form that is then filled with non-conductive powder. The resistance wire is free to expand and contract as temperature changes, minimizing error caused by mechanical strain. The powder increases the rate of heat transfer into the coils, thereby improving the response time. Coiled element RTDs are usually protected by a metal sheath in forming RTD temperature probes. 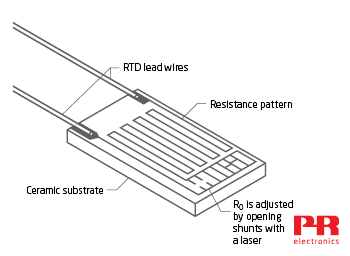 Thin film RTDs are mass-produced and cost less than the other RTD types. They are smaller, and have a faster response time than the others, which is desirable in many applications. They are made by depositing a thin pathway of platinum on a ceramic base. 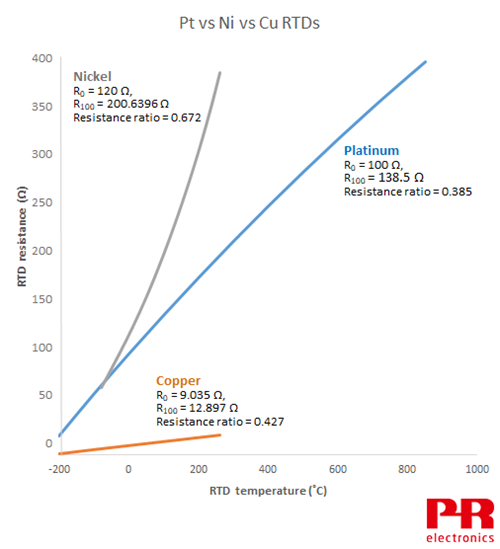 Laboratory-grade RTD standards use higher purity platinum with a higher resistance ratio: (139.2 Ω - 100 Ω) / 100 Ω = 0.392 Ω / °C. At temperatures above +670°C, metal ions liberated from the stainless steel probe will contaminate the high purity platinum, changing its resistance ratio. For this reason, these RTDs are protected by a probe made of silica glass or platinum. These probe materials remain inert at high temperatures, so the RTD remains uncontaminated.

The error due to lead wire resistance can therefore be calculated as follows:

To compare, here are the numbers for a 2-wire platinum RTD with the same lead wire resistance:

Because a nickel RTD is so sensitive, a low-cost, low-accuracy transmitter can measure the RTD with acceptable accuracy. Nickel RTDs are found in HVAC and other price sensitive applications.

Copper RTDs have the same thermal expansion rate and electromagnetic hysteresis as copper windings used in electric motors and generators. For these reasons, copper RTDs are sometimes used to measure winding temperature.

Copper also has an extremely linear temperature vs. resistance relationship. Because of this, it is possible to accurately measure a narrow temperature span without additional linearization.

According to published Resistance vs. Temperature tables, the RTD creates a resistance of 121.3715 Ω at 50°C, so the RTD is functionally linear between 0…+100°C.

Most sensor builders make Platinum RTDs with accuracy levels that conform with the IEC 60751 or ASTM E1137 RTD standards.

Note that IEC 60751 specifies a maximum temperature range for each class. For example, a class A sensor equipped with a coiled RTD element must maintain the specified tolerance from -100…+450°C. When operated outside this temperature range, the sensor accuracy might default to class B.

Sensors that meet ASTM E1137 grade A or grade B tolerance must maintain the specified tolerance from -200…+650°C.

This table shows the calculated tolerance for each class and grade of RTD. Notice that class C RTDs have a wide tolerance of ±6.6°C at 600°C. Most industrial applications require RTDs with Class B or better tolerance. 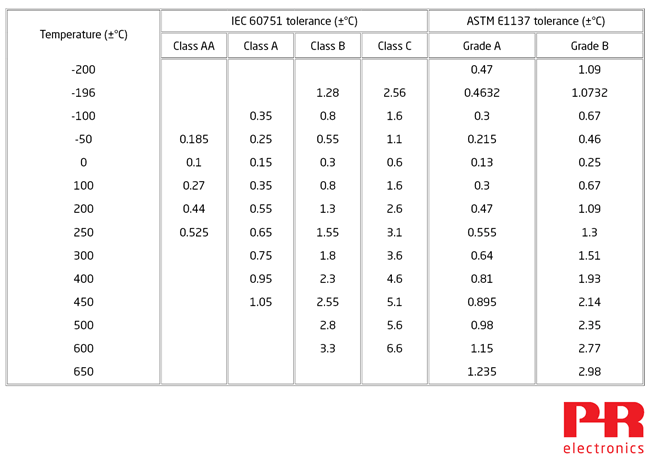 The following graph shows the tolerance of RTDs that conform to IEC60751. You can see that RTDs are most accurate at 0°C, and exhibit a greater error as temperature gets hotter or colder than 0°C. 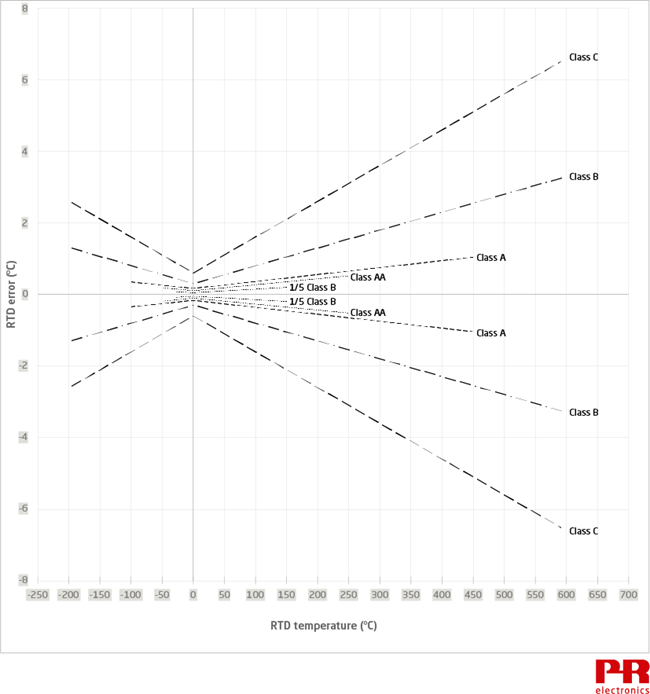 Many sensor builders offer RTDs with better than Class AA tolerance. The tolerance of these high accuracy RTDs is usually described as a fraction of class B tolerance. In the graph below, a “1/5 Class B” RTD has a tolerance of only ± (0.06 + 0.001 ǀ t ǀ) between -30…150°C. This tolerance is five times better than a class B RTD.

Coefficients A, B, C, and α, δ, β are unique to each RTD. The following values apply to RTDs conforming to IEC 60751 and ASTM E1137 standards:

The alpha of a Platinum RTD that complies with IEC 60751 is:

Nickel RTDs have an alpha of:

Copper RTDs have an alpha of:

Even high quality RTDs do not exactly match the IEC 60751 / ASTM E1137 R:T curve. To further improve measurement accuracy, a calibration lab can “characterize” an RTD. This is done by carefully measuring the RTD resistance at a few different temperatures and then using that data to derive the α, δ, β and A, B, and C coefficients.

Back to PR Knowledge Library

Enter two values and calculate the RTD resistance of any platinum RTD.

Curious about the advantages of converting RTD and Thermocouple signals to 4...20 mA current?

Enter two values and calculate the RTD resistance of any platinum RTD.

Curious about the advantages of converting RTD and Thermocouple signals to 4...20 mA current?