The members of the maintenance team at Fyn Power Station were fed up getting error messages and false system alarms from one of the boiler’s temperature surveillance systems. The problem occurred when the ambient temperature approached 60˚C. The solution to the problem did not seem straight-forward, but after a talk with one of PR’s sales engineers they decided to do a test set-up with PR 3111 isolated TC converters – and that solved the problem … also at 60˚C .

Fyn Power Station generates electricity for the Nordic electricity market and supplies heat to more than 85,000 Danish households and industries, including horticultural greenhouses. Today the station is owned by Vattenfall, one of Europe’s largest electricity producers. 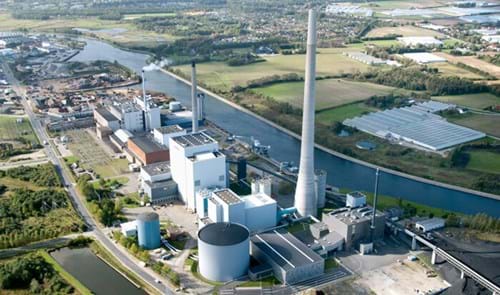 The station used to get false system alarms and error messages from one of the boilers’ temperature surveillance systems. The problem occurred when the ambient temperature hit 60˚C in the boiler room, which often happened in summer.

”False alarms and false error messages from the boiler room surveillance system used to be a re-occurring problem… especially during the summer”, says Jesper Holm Nielsen, electrician at Fyn Power Station, and continues: “Of course we had discussed how to solve it, but there didn’t seem to be a straight-forward solution… by chance, one of us ran into one of PR’s sales engineers at a trade show. We talked about it, and the PR representative suggested a solution that sounded worth the try”.

The team at Fyn Power Station then agreed to do a PR TC converter test set-up together with PR.

The test set-up delivered stable system monitoring from day one

The PR 3111 converters are designed to operate within a temperature range of -25˚C to +70˚C. To test their ability to solve the problem, twelve 3111 TC converters were installed in the panel ‑ a cost-efficient solution that delivered stable system monitoring from day one.

“We made a new set-up with twelve 3111 TC converters… and then we waited for false alarms to occur… and we waited… and waited. No alarms. No error messages due to ambient temperature fluctuations. The system performed and still performs as expected - also on very hot summer days”, Jesper Holm Nielsen concludes.

The panel in the boiler room equipped with PR 3111 temperature converters.

We sincerely thank the team and electrician Jesper Holm Nielsen at Fyn Power Station for participating in this article.

Since 1953, Fyn Power Station has supplied energy to the city of Odense and the rest of the island of Funen.

Fyn Power Station has two active power plant units and three units based on waste. The units produce electricity for the Nordic energy grid as well as district heating for large parts of Funen.

Fyn Power Station is certified according to the international environmental management standard ISO 14001.